Theaters in Nepal: Learning to navigate a new terrain The revival of theaters is at least two years away, and in that time, they must find a way to stay in people’s mind and survive | Play: Seto Kapal

The show must go on, says theater artist Bijay Baral. It’s with this mindset that Mandala Theater in Anamnagar, Kathmandu, has been holding acting classes and workshops as well as producing plays after the lifting of the initial lockdown last year.

Theater, Baral says, is an important part of the society—it helps put things in perspective and it can be therapeutic, for actors and audiences alike. Covid-19 might have stopped people from heading to theaters but artists are still optimistic about its future.

Ghimire Yubaraj, artistic director, Shilpee Theater, Battisputali, says it’s definitely a challenging time but art, he says, is always evolving and theater too must adapt and change. Ghimire believes the pandemic led to a much-needed discourse on theater’s use and exploration of the digital space. Artists and theater groups now need to expand on that idea to be a part of people’s lives in a way that doesn’t necessitate their physical presence.

In recent times, Shilpee Theater has showcased two plays virtually. This is their way of providing their team of artists a platform to cope with the pandemic, keep them enthused and try to emerge from the crisis. Mandala Theater too has been putting up plays online. While some are recordings of old plays, there are several new acts too. However, most theater artists ApEx spoke to weren’t solid on the idea of showcasing plays online. They believed it could be a temporary arrangement but not a viable long-term solution. The most common argument was that the charm of theater is in its live audience and without an audience to react to what is happening, stage performances are pointless.

Over at International Center for Social Theater (ICST), Nepal, Gopal Aryal confesses that he doesn’t see much scope and future of theater unless the pandemic is over. He isn’t enthusiastic about virtual performances, claiming that by changing the basic module of theater we run the risk of robbing it of its essence.

Saraswati Adhikari, program coordinator at Shailee Theater in Ratopul, feels theater is all about close contact and observation. The emotion, sound, and light feel different when you are watching a live play. The effect just isn’t the same when it’s recorded.

The upside of going online, however, is that there is greater reach, she says. Shailee Theater held poetry recitals and essay competitions online as well as participated in a virtual Children’s Theater Festival last year. Their audience consisted of people across the nation—those who wouldn’t have been able to make it to the theater to watch the performances. The feedback they received was mixed but the majority of the viewers said they wished they had been able to attend the programs in person. The revival of theaters is at least two years away, agree artists and, during that time, theaters must find a way to stay in people’s minds and survive. That is exactly what Ghimire is intent on doing. He plans to put up four online shows a day of the play ‘No Exit’ starting a few weeks from now. Only this time around, he is also exploring options to monetize it.

“I think theater’s success in the digital sphere depends on how well we are able to execute it,” says Ghimire. He adds that many are worried that the nuances of theater will be lost on a virtual medium. Better equipment and fine-tuning of various technological aspects will largely take care of that issue. But there’s no denying that for theater to grow that option must be explored. Ghimire believes it had to be done sooner or later and that the pandemic only expedited the matter.

This isn’t the first time theaters in Nepal are dealing with such problems and having to assess their situation and modus operandi. After the 2015 earthquakes, the theater industry took a big hit. Fearful of closed spaces, it was only after two years that there was a steady trickle of people and theater artists could finally heave a sigh of relief.

Things seem to be headed the same way this time too, say artists. With a virus that is getting stronger with each round, it’s going to be a while before people are remotely comfortable with the idea of being in close proximity to others, even after being fully vaccinated, which, in itself, might take some time.

Nabaraj Budhathoki, chairman of Shailee Theater, says they were just four plays old when they had to shut the doors, albeit temporarily. Now, as they are looking to open up and work on previous scripts and projects, he realizes they will have to follow an entirely different system, at least for a while, accepting that the very nature of theater and its audience has changed. For one, the plays they now produce will have to be a lot shorter than before, he says.

“We are planning to come up with new plays every three months but the shows will be small-scale, meaning short, and with limited people in the audience. We’re toying with ideas at the moment,” says Budhathoki. Theater Village Nepal, on the other hand, has no plans of reopening soon. Assistant artistic director Dilip Ranabhat says unless there is mass vaccination across the country and the threat to public health is mitigated, theaters cannot function properly. The team at Theater Village Nepal has held multiple meetings to discuss possibilities but they have been unable to come up with feasible solutions.

Deepmala Pariyar, group coordinator at ICST-Nepal, differs. She says something is better than nothing and that, right now, anything that allows theater to produce good content and artists to perform shouldn’t be disregarded.

Much like other forms of art, theater is cathartic and artists, Pariyar says, need that outlet more than ever before. She adds theaters can also make situational dramas that can help viewers make sense of what’s happening and address mental health issues many people are facing today.

Theater artist Pashupati Rai says many involved in the field are doing whatever they can to keep the spirit of theater alive. But they could have fared better had the government paid a little more attention. Theater, she says, has always been neglected but now is the time to use it for information dissemination and awareness. 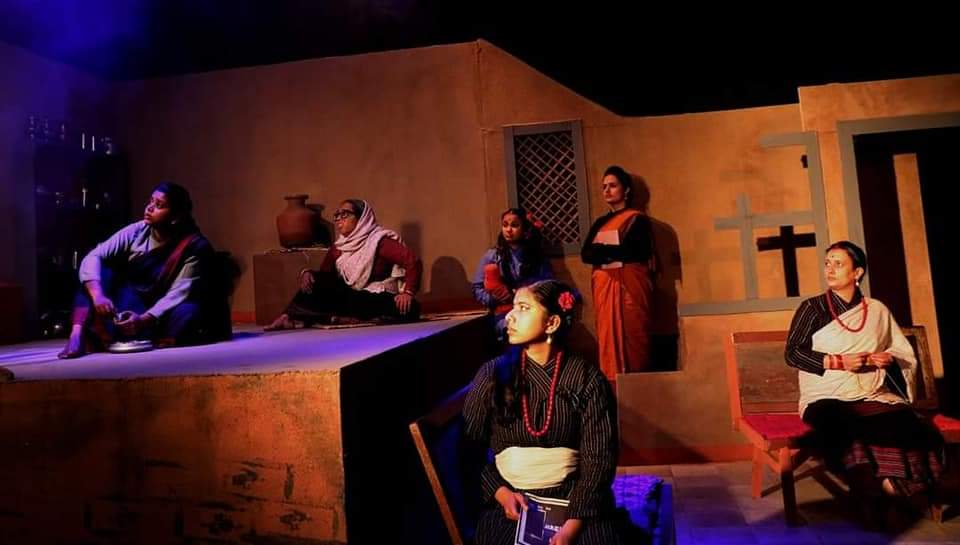 Ghimire, on the other hand, says the government only looks for financial gains and thus doesn’t invest in arts, which aren’t always profitable. But arts, he believes, are even more important during crises. Apart from their emotional benefit, they can help document history too. Unfortunately, there is no acknowledgement of that. Government’s involvement is definitely needed for theater’s survival and development, adds Ghimire, but that doesn’t mean the industry won’t do everything in its capacity to thrive on its own.