Risks have increased due to restrictions on movement, confinement with perpetrators, constant surveillance, and disconnect from social support systems

According to Domestic Violence (Offense and Punishment) Act 2009, “Domestic violence refers to any form of physical, mental, sexual and economic harm perpetrated by a person to a person with whom he/she has a family relationship and this word also includes any acts of reprimand or emotional harm”.

Women and girls have become especially vulnerable to violence due to the measures taken to contain the virus, in what is known as the shadow pandemic. The risks have been amplified due to restriction in movement, confinement with perpetrators, constant surveillance, disconnect from social support systems, inaccessibility of services, and redirection of resources for Covid relief.

The first lockdown in Nepal started on March 24 and was eased on 21 July 2020. Upon analyzing Nepal Monitor's data—an initiative of COCAP that collates reports of violent and non-violent incidents and political contestation in Nepal based on print and online news reports—we found that the number of reported domestic violence cases went down compared to the past few months when the lockdown started. And the post-lockdown months, in general, saw lower numbers of domestic violence media reports than the pre-lockdown months of 2020, with spikes in May and October. 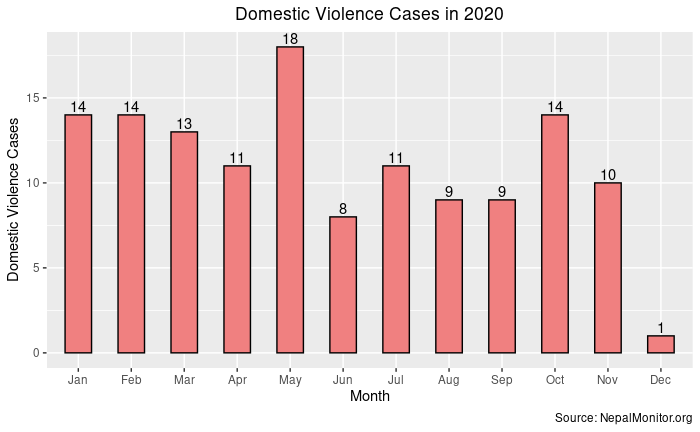 Even in Kathmandu Valley, registered domestic violence applications declined by around 93 percent in the first month of the first nationwide lockdown as compared to the same period prior to the lockdown. The degree of the decline is alarming and it indicates the inadequacy of the formal reporting mechanisms.

While the complaints registered with Nepal Police plummeted, as per the blog report by the World Bank, “A 24-hour toll-free helpline run by National Women Commission (NWC) received 885 calls related to domestic violence from April to June 2020. This is over twice the number of calls received within the same period prior to the lockdown (Dec 2019-Feb 2020)”. 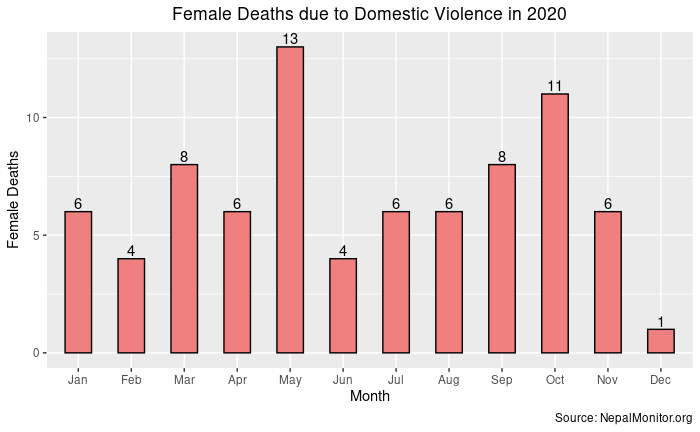 “The call numbers after the imposition of the lockdown was very high. Because of lack of mobility and confinement, we would receive cases of physical harm, mental torture, and other forms of domestic violence which women were compelled to endure,” says Kabita Khadka, one of the helpline officers at National Women’s Commission.

The alternative reporting mechanisms were not necessarily prepared to meet the needs of the surge in the number of survivors seeking help, however. “As the lockdown happened all of a sudden and there were only ten of us responding, we did not have proper planning and were hamstrung by limited human resources,” says officer Khadka, adding that the ten officers who had to receive the calls had to bear high levels of stress and mental exhaustion.

(1145 is a toll-free 24/7 helpline number for anyone facing violence. It provides services including counseling and support in reporting cases of violence. The helpline ensures full confidentiality and respect of individual choice.)