Tulsi Ghimire: A disciple who more than paid his guru dakshina A trendsetter in the Nepali film industry | Photos: Pratik Rayamajhi/ApEx

I was born into a middle-class family in a small village of Kalimpong. My father had retired from the Indian Army when I was just a boy. He then got into farming and cattle-rearing to raise his family.

Radio was a big thing when I was growing up. It was a symbol of prestige in my village and very few houses there had one. As a boy, I used to be fascinated by this box that projected people’s voices, songs and music. I used to go to the houses that had radios just to look at them. I could never figure out how they produced the voices. The station was tuned to Lucknow and I wanted to go there, to see what was happening. So, in a way, I developed an urge to leave my village from an early age.

When I was in grade seven, my teacher asked the whole class what we wanted to become and I blurted out that I wanted to join the film industry. I do not know why I said that but from that day, my friends started teasing me by giving me names of various Bollywood actors of the time.

After completing my schooling, I went to Pune for further studies and joined the army by following in my father’s footsteps. But  I soon realized that I was not cut out for military service. I used to feel that I was being trained to kill people. When I shared this with my father, he too agreed that I was not meant to be a soldier. At the time, becoming a filmmaker had not even entered my mind. It was only a childhood dream I had shared in my class, for which I was taunted and made fun of.

I joined the industry by happenstance while in Sikkim. A film unit had arrived there for shooting and I got to know some of the crew members, including the cameraperson Lalji Yadav. It was Yadav who pushed me into filmmaking. He advised me to join the industry—but only if I was willing to put my heart and soul in it. I had nothing going for me at the time, so I was more than willing to take a leap of faith.

And so, at Yadav’s suggestion, I left for Mumbai (Bombay at the time) in 1974 with InRs 500 in my pocket. I wandered around the Film City seeking jobs. At this time, I met makeup artist Adaa Khan, who taught me how to do makeup for films. That’s how I entered the world of cinema, as a makeup artist.

During the shoots, I learned various technical aspects of filmmaking. I learned to do the work of a lightboy, spotboy, camera caretaker and even stuntman. It was a struggle but also a big learning curve.

I learned film editing under the legendary film editor Kamlakar Karkhanis. In fact, whatever I have learned about making movies, I learned from him. He was a strict teacher. One time in the 1970s, he had gone to Pune for three days and I was left in Bombay with no one to support me. I literally had nothing to eat for days and when he learned about my situation after returning from Pune, he reprimanded me instead of showing sympathy. He told me that I should go on with an empty stomach for a few more days.

I was angry and heartbroken by the way he treated me that day. But later I would learn that he was only teaching me a lesson. He told me that starvation gives a person a different perspective on life, which is an essential quality for a filmmaker. That is how Karkhanis taught me and I will always be thankful for his teachings.

I worked with him on more than 30 films as his chief assistant. My first break in Bollywood was the movie ‘Shradhanjali,’ where I worked as an editor.

My foray in Nepali film industry was also a sort of tribute to Karkhanis. He had once asked me to make 10 Nepali films as his Guru Purnima wish. It seemed impossible at the time, but I agreed to it anyway.

When Karkhanis passed away at the age of 82, I made a promise to myself that I would fulfill his wishes at any cost. I had no money and no crew to help me and when I confided my situation to my friend Rajkumar Sharma, he told me to just start making a film and not to worry about money.

His idea was to start with whatever resources I could muster and see where that leads. So I started my first project. The movie was called ‘Basuri’ based on a drama I had performed in my college days.

When we were in a dire need of money to finance the film, we managed to get Rs 500,000. I was able to make my first film that way and it was released in 1981. I then went on to make one after another movie: my 10th one was ‘Dakshina,’ named in honor of my late teacher.

I have made a lot of memories working in the Nepali film industry. My goal is to direct at least 25 movies to set the Kollywood record. He is one of the most phenomenal directors I have worked with. He gives actors the space to improvise and put their inputs in the characters they are playing. The freedom he gave his actors helped them to put extra input to their characters. More importantly, he pushes them to do better and put in more effort. He was meant to be a director. I feel lucky to have him as my husband. He is caring, sensitive, and an amazing partner. I also have no complaints with how he treats his children. He will do everything to give his children a good life. One rarely comes across such an emotionally-mature person. 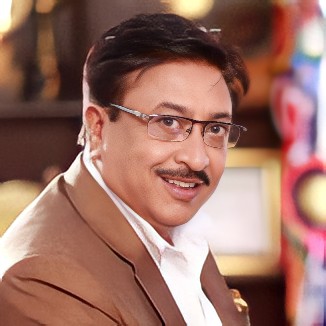 He has the personality of a director. The visions he has are like no other. Without him, the progress we see in the Nepali film industry today would have been possible. Most innovations we see today in Nepali films is his contribution because he started it all.