Mamata Sunar of Birendranagar-6, Surkhet, in Karnali Province still has to endure caste-based discrimination in her daily life. She is discriminated against by non-Dalits in the neighborhood.

When she crosses paths with her neighbors, they sprinkle gold-infused water on it before walking. In the public wells and water-sprouts, Mamata only gets her turn after the so-called higher castes have filled their utensils.

The law does not recognize the insults and discrimination suffered by Mamata. Mamata, born into a Dalit family who have been given the tag of low-caste for centuries now, has had to endure the curse of untouchability in her village and community. “The books of law say Nepal is free from untouchability, but in practice, it is still prevalent. Dalits like myself are discriminated against in our own localities,” she says.

The sufferings of Batuli Sunar from Birendranagar-2 are similar. Even though the law prohibits any discrimination based on the caste system, the community she lives in has not accepted it. “We have to be careful not to touch others while walking on public roads,” Batuli says. For her, the discrimination laws against Dalits are as good as non-existent. It is because of non-implementation of laws at local levels, she believes. “The law is limited to paper and has never been applied in practice,” Batuli says, “When the state does not implement the law properly, the perpetrators are not punished and we have to suffer eternally.”

“The government only makes laws but doesn’t enforce them in practice,” adds Shanti Badi of Birendranagar-11. “While the government is silent, caste discrimination is same as it was in the past. Non-Dalits are taking advantage of them being so called high-caste.” The laws against caste-based discriminations are not being implemented due to the incompetence of the state, Shanti believes.

Lal Bahadur Nepali of Birendranagar-11 agrees with Shanti. The law has always been systemically discriminatory against Dalits, he believes. “Even when Dalits go to seek justice, they do not get anything. Police and CDOs do not register cases of caste discrimination in collusion,” he says. 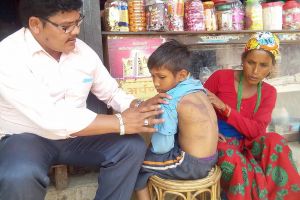 Dalits are still discriminated against and insulted in public places, communities and neighborhoods because of their caste. Despite increasing public awareness about caste-based discrimination, discrimination against Dalits has not ended yet. Dalit rights activists claim that the nexus of caste discrimination has not been broken in the communities even now. This is the reason why non-Dalits have not stopped attacking Dalits, they say.

Even now, in most places of Karnali, Dalits are despised and humiliated in water sprouts, schools, roads and also at the policy making level of the state. Even the Dalit people’s representatives at the local level are falling prey to systemic casteism.

Karnali State Assembly member Sita Nepali says, “After federalism, there was a political change in the country, but there was no change in the attitude towards Dalits. Due to non-implementation of discrimination laws, we have not been able to enjoy the rights and entitlements given to us by the constitution.”