Photo Feature | When Kathmandu heats up… you go ice-skating Situated on the Maitighar-Bhadrakali cut-through road, Nepal’s first ice-skating rink is housed in what looks like a large storage building. There, children and adults alike can enjoy a great day without having to worry about the turbulent weather outside | Photos: Pratik Rayamajhi/ApEx

‘Unpredictable’ would be the word to describe Kathmandu’s weather in the month of July. One moment the sun is smiling down on you and the next, the skies are pelting down, sending you scrambling for cover. It’s no fun being outside. So where would you go for fun? Well, Fun Land, for one. Situated on the Maitighar-Bhadrakali cut-through road, Nepal’s first ice-skating rink is housed in what looks like a large storage building. There, children and adults alike can enjoy a great day without having to worry about the turbulent weather outside. I visited a recent afternoon, a weekday, expecting few people. But to my surprise the place was a hive of activities. Gaggles of children and teenagers screaming and laughing inside the rink. Most were using skating guides in the shape of dolphins for stability. Those brave enough were guideless—flailing about and falling, yet still getting up for a repeat. 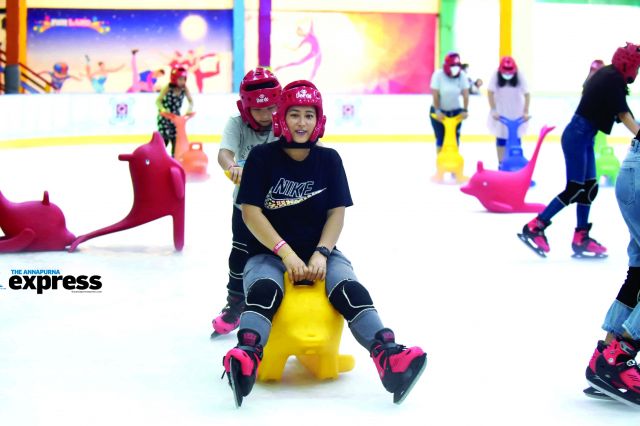 The facility, which opened in April, has around 20 coolers to keep the ice rink cool and firm. The place also offers other fun activities like trampolines, rock-climbing and mechanical bull-riding, but ice-skating is easily the biggest draw. I was tempted to give it a try but after seeing many people slip and fall, I decided to sit at the nearby food court and watch instead. “How hard could it really be?” I was asking myself after seeing even the adults using funny-looking dolphin guides that also doubled as sleds. Bhim Bahadur Adhikari, the ice skating captain of Fun Land, satiated my curiosity: “You’ll need to practice sincerely for two to three days if you do not want the support dolphin.”

Fun Land also offers an ice-skating training package. In fact, the instructors, I found out, were trained right there. Encouraged by Adhikari, I decided to give it a try. A staff member helped me wear the skating boots and I was ready… or so I thought. To my embarrassment, I discovered it was much more difficult than I had thought. I couldn’t maintain balance even with the support dolphin. I had to be held by the instructor just to find my balance, to learn how to stand correctly, before I could use the inanimate plastic dolphin. Even though I was skating on an ice surface, there was a lot of sweating and panting. I sympathized with the people I was photographing earlier.