Our growing obsession with jewelry Nepal imported Rs 11.12 billion worth of gold in the first quarter of the current fiscal. Manik Ratna Shakya, president of the Federation of Nepal Gold and Silver Dealers Association, says even at approximately Rs 93,000 a tola, Nepalis’ interest in gold hasn’t wavered | Photos: Pratik Rayamajhi/ApEx

Thirty-five-year-old Shreya Rana doesn’t wear much jewelry. It’s not something she is particularly fond of. Even at family functions and other events, all she usually has on are the things she wears on a daily basis: Two silver rings (‘lucky charms’ she has had since college) and her simple ruby-and-diamond engagement ring. If she’s in the mood for it, she might add a pair of small earrings. She doesn’t feel the need to be all decked up in millions-of-rupees worth of gold and diamonds but that, in a family where people buy new jewelry to match every outfit and occasion, makes her a misfit. She says she can feel the contempt when her relatives pointedly look at her neck and ears. “Jewelry, I feel, has always been a representation of our economic status. It’s taken as a measure of success, which probably explains our obsession with it,” she says.

Nepal imported Rs 11.12 billion worth of gold in the first quarter of the current fiscal. Manik Ratna Shakya, president of the Federation of Nepal Gold and Silver Dealers Association, says even at approximately Rs 93,000 a tola, Nepalis’ interest in gold hasn’t wavered. Gold and diamond jewelry are safe investments and our culture, he says, also promotes the popularity of gold. There are many rituals and occasions that mandate the use of the precious metal as it’s considered auspicious, he says. Different cultures also require special types of jewelry for various purposes so people buy them without hesitation. It’s also a case of people wanting to upgrade their lifestyles. In the hierarchy of needs, luxury items like gold and diamonds occupy the top of the pyramid, he says, and when people have money, it’s natural for them to want more than the basics. 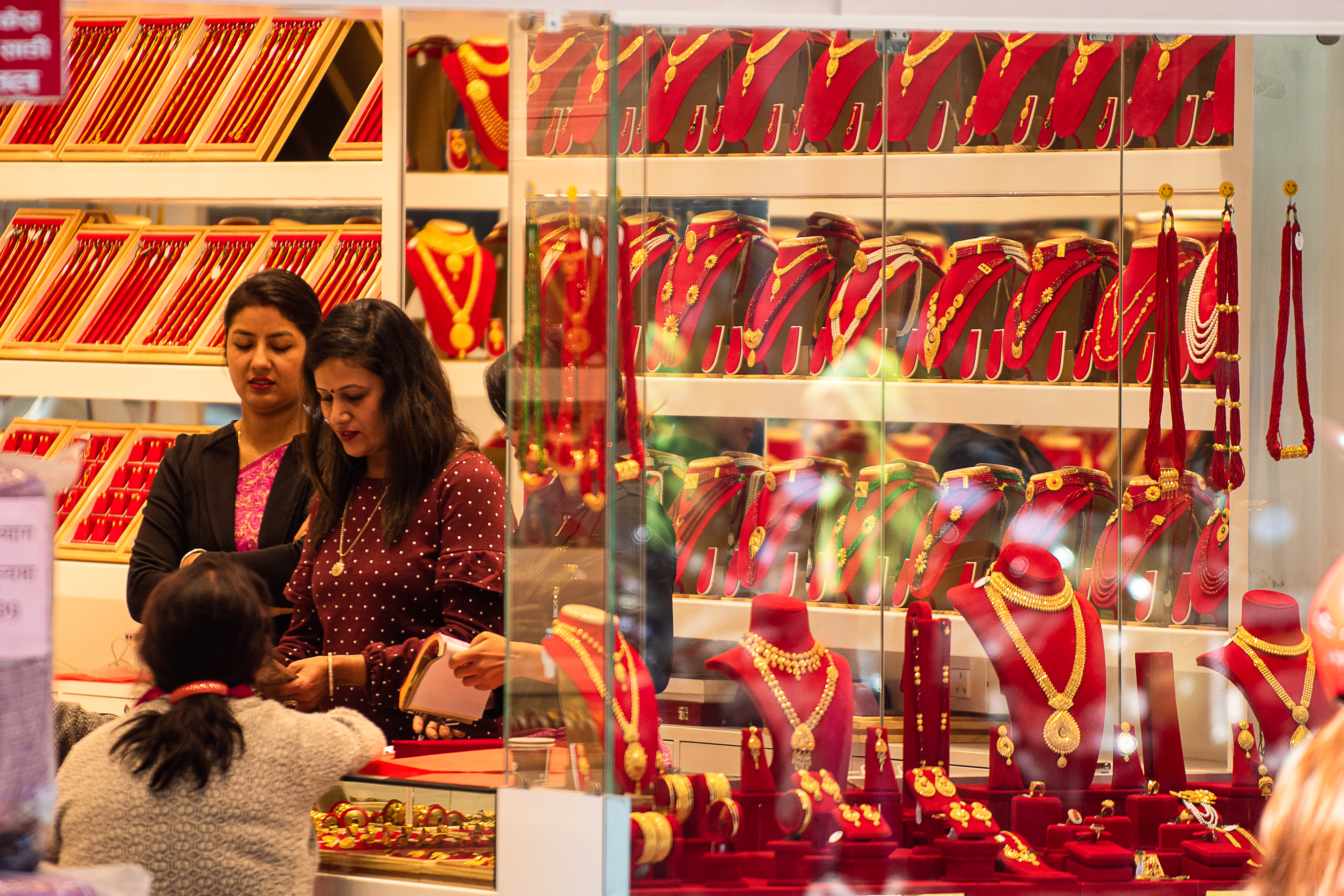 When ApEx questioned some people who were shopping for jewelry in New Road, Kathmandu, most were found to be either looking for something new because they had some money saved up or they were there to exchange old items for trendier ones. Rabi Krishna Shrestha, one of the directors of Asri Jewelers Pvt. Ltd., says swapping pieces one had bought earlier for newer designs or bigger items is common. Most customers they get fall into that category. “I think that’s the appeal of jewelry. You will always get your money’s worth,” he says. Rashmi Tuladhar, 48, says she buys jewelry for herself now and then as she wants to have a sizable collection by the time her son and daughter are of marriageable age. “If I ever need a substantial amount of cash, I can always sell my jewelry,” she says. Tuladhar wanted to buy a gold choker, similar to what Deepika Padukone apparently wore during one of her wedding functions.

Rosy Shakya, proprietor of Lidhansa Lun Jyasa in Pulchowk, Lalitpur, says people’s preference for jewelry has always been largely driven by trends and what their family and friends wear. There was a time when everyone had to have a diamond broach. Now, layered neckpieces are all the rage, and the bigger they are, the better. “Earlier, bridal wear could be made with two to three tolas of gold. Now people are opting for a minimum of five tolas for a single set. We have also been commissioned to use 10 tolas of gold. If people have money, there seems to be no limit on how much they are willing to spend on jewelry,” says Rosy. Karna Shakya, owner of Taremam Jyasa, near Rosy’s jewelry store, says he sees a lot of competition among families over who is spending how much on gold and diamonds. It isn’t unusual for people to want to outdo one another and wear the bigger or better necklace or earrings. That, he feels, is one of the driving forces behind people’s growing interest in jewelry. Though business surges during Teej, Dashain, and the wedding season, there is always a steady trickle of customers throughout the year, he says. People also bring in small gold items like rings, studs, and chains that they have lying around at home to the shop to extract gold from it and make a single statement piece. The focus, jewelers in the valley agree, is on large, stylish pieces and rarely ever on old, traditional designs. Jewelers ApEx spoke to say people are more likely to come searching for an item they saw someone wear at a wedding or on TV or social media like TikTok. Personal preferences are cast aside in favor of trends.

Thirty-eight-year-old Samrakshya Karki loves wearing jewelry. A sizable chunk of her salary, she says, goes in buying diamond neckpieces, colored stone earrings or gold ornaments every Dashain or Tihar. At other times too, she makes little purchases—a diamond ring here, a gold chain and pendant there. She says she gets her love of ‘gahana’ from her mother, whose accessories always had to perfectly match her sarees. Rana remembers her parents buying new ones for weddings and other elaborate social functions and now she finds herself following in their footsteps. “The best thing is you get to wear these beautiful accessories and you aren’t wasting your money either,” she says. Karki, however, has a lot of friends who don’t wear jewelry. They choose to invest in land, shares, and bonds. “Just because they don’t buy and wear jewelry doesn’t mean they don’t have the financial means to do so,” she says. “But our culture has become so warped that if you aren’t wearing big baubles, you are automatically placed in the lower rungs of the society.”

Unfortunately, many people don’t pay enough attention to proper styling of these baubles and that takes away from their charm, says Rosy. She often sees people wearing accessories that don’t go with their clothes. Wearing too much—a heavy necklace, dangly earrings, and fancy bangles—can make individual pieces lose their allure. Young people are also wearing a lot of gold and diamond accessories these days, perhaps cajoled into it by their parents, she adds, and that can be off-putting.

“Jewelry seems to have no age bar but that shouldn’t be the case. We have become so embroiled in an economically competitive culture that we are disregarding aesthetics and what’s proper,” she says. Rana adds that she has seen children with heavy gold bracelets, chains, and even pendants pinned to their shirts. It horrifies her, she says, to think that parents have extended their insecurities onto their children. “I believe the purpose of jewelry is to make the wearer look and feel good. It’s supposed to have a physical and emotional allure. But today it seems to be a way to flaunt your wealth and make the gap between the haves and the have-nots more vivid,” she says.