Master’s in Economics from Tribhuvan University, 1970

Bachelor’s in Law from Tribhuvan University, 1976

Things have changed a lot when it comes to how we see human trafficking today. When I first started working in this field in the 1980s, the situation was quite bleak. It was never my intention to work in this field. But there was one particular incident that compelled me to do something about the problem.

I had just returned from the UK, where I had been living with my family. Understandably, my children were not pleased with the idea of trading the comfort and facilities of the UK with Kathmandu. But I wanted them to at least know about their country. We decided to take a family trip across the country, and that was when I discovered how bad the human trafficking problem was in Nepal.

At Thankot, we saw two minor girls, aged 14 and 15, handcuffed by the police along with their traffickers.  They were about to be sold for Rs 10,000 each. The incident made a profound impression on me. I realized then and there that my mission in life would be to prevent trafficking.

Setting up an organization and going about doing what I wanted to do was not easy back then. It was during the time of Panchayat regime. Human trafficking was not taken as a serious issue. With the support of my husband, I was able to publish a piece about the incident in Gorkhapatra. But that was not enough, I had to do more to raise public awareness and prevent human trafficking.

My first step was to form an organization through which I could rescue and rehabilitate trafficking survivors. It was impossible to start a non-governmental organization back then, so I registered the organization with the Department of Industry in 1987 under the name Agroforestry, Basic Health, and Cooperative (ABC) Nepal. It was the first organization that worked in the field of anti-human trafficking.

I started the organization with the capital of Rs 7,000. There were no donors and the government was not at all supportive. I started giving the trafficked survivors non-formal education, so that they could make a living. But above anything else, it was important to make people aware about the plights of the trafficking survivors. So I started a radio program called “Cheli ko Aawaz”, recorded a cassette named “Shakti”, and staged street plays in more than 32 districts. I also wrote a song called “Bechiyeko Keti ko Aawaz” to raise a debate about trafficking of young girls and women.

In 1996, I was involved in the rescue of girls and women sold to brothels in Mumbai. Among the rescued women, 124 were from Nepal and some of them were minors. After the rescue, these girls and women were sent to Nepal, but they were stopped by the authorities at the border. They were being prevented from entering their own country.

I wrote letters to the then prime minister, and even visited him in person to appeal for their safe entry. He promised to do the needful, but he never did.

It was sad to see that even the general public was against allowing these poor girls and women to cross the border.

There was a lot of misconception and stigma in the Nepali society around trafficking survivors. People believed that they were bringing HIV/AIDS into the country. Despite these pushbacks, I was undeterred. I ignored the naysayers and focused on my priority, which was to bring these girls and women home, empower and reintegrate them in society. I coordinated with several other organizations to bring our daughters and sisters home.  First, we had to start with the juvenile court in India, since there were several minors among the rescued survivors.

We sent an application to the juvenile court in Maharashtra for the hand over of thse girls. The court granted our request and handed the girls under my responsibility. Some social organizations in India also supported us in the process.

The rescued girls and women had to live on the Nepal-India border for nearly three months before they were granted the permission to enter their own country.

Altogether, seven Nepali organizations were involved in the rescue mission. We decided to look after and rehabilitate the survivors. It was not an easy task, because we didn’t have enough counselors back then. Moreover, there was the fear and stigma of of HIV/AIDS. Even those people working with the survivors feared that they would catch the virus.

It was true that 50 percent of the rescued girls and women were indeed carrying the virus. We had to conceal their status in order to prevent public backlash, or worse, them being ostracized by society.

We offered them the necessary support and treatment for their rehabilitation. Fortunately, we also got support from this Indian organization called Stri Shakti. They sent their counselors to train our employees on the right way to deal with the survivors.

Over the years, ABC Nepal has become a big organization with many facilities and services for trafficking survivors. We have rehabilitation centers and we provide skill trainings to the survivors. We also have people working for us at the border areas to prevent trafficking from happening.

It is rewarding to see so many trafficking survivors starting their own business from the training they have received.

I stepped down from my role in the organization in 2017. I believe there are many capable individuals who can carry on with the work that I started 30 years ago. 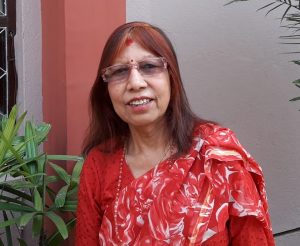 She has been like a sister to me since college days. I even had an opportunity to work with her. I have seen how hard she works in whatever she puts her mind into. She is disciplined, friendly, and a generous person. In her line of work, sometimes situations get frustrating. But you have to admire her patience. She is never deterred by obstacles. 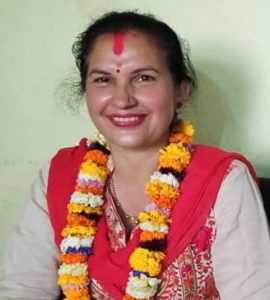 I have known Durga ma’am for the past 25 years. Her work to prevent human trafficking in Nepal is admirable. I have seen her dedicate most of her time to working for ABC Nepal. Even after leaving the organization, she is still concerned about the work that we are doing. She is constantly in touch with us to make sure the survivors in our shelter homes are doing well. 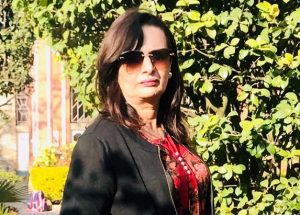 Durga ma’am has been an inspiration for many people. I have known her since my childhood, and I feel like the country has not given her the recognition she deserves for the work she has done. She dedicated her whole life to preventing trafficking of girls and women. Many of us who got into this field have been inspired by her. We are following her footsteps.