Dahal will settle for nothing less than prime minister’s chair Dahal has made his desire to become prime minister known as well. On June 24, he said that he could take drastic steps to address bad governance if he were to be the prime minister

Nepal’s major political parties will certainly not contest the upcoming parliamentary elections on their own. What is uncertain, though, is the type of electoral alliances they will forge.

For now, Pushpa Kamal Dahal’s CPN (Maoist Center) sits on the fence, between the Nepali Congress (NC), its current coalition partner with a liberal ideological bent, and the CPN-UML, a fellow communist party. Dahal wants to wring out maximum benefits for himself as well as his party.

Congress will still be his first priority, but he will then drive a hard bargain. The Maoist party wants the coalition’s tickets in at least 60 of the 165 first-past-the-post (FPTP) seats. A Maoist leader says the party has already conveyed this to the Congress leadership. If not, the Maoist Center will ally with the UML.

The three parties have so far managed to keep the talks on electoral alliances, reportedly taking place at multiple levels, under wraps out of fear of external saboteurs.

There are reports that Deuba has offered Dahal the posts of the President and the Speaker in the post-election political dispensation.

Dahal has made his desire to become prime minister known as well. On June 24, he said at an event in Kathmandu that he could take drastic steps to address bad governance if he were to be the prime minister.

The need for an electoral alliance has become indispensable even for senior Congress leaders to win elections. Ram Chandra Poudel, who faced defeat in his last electoral outing in 2017, is a case in point.

Senior Congress leader Krishna Prasad Sitaula says, “When even electoral dates are not finalized, it is too early to talk about the nitty-gritty of poll alliances.”

The ruling party is precariously placed, as the seats must also be shared with the CPN (Unified Socialist) and the Madhes-based parties if it wants to keep the KP Sharma Oli-led UML away from power.

“The potent anti-alliance voice within the party and the difficult demands of other parties in the coalition have complicated things,” says NC Central Working Committee leader Nain Singh Mahar.

But there is still pressure within the Congress that the party should contest at least 100 seats under the FPTP—a tough ask in a five-party coalition. Some NC leaders fear rival candidates could split votes if the party settles for fewer seats. At the same time, there is a concern that the Maoists could forge an electoral alliance with the UML.

The local poll results have made the Maoist Center more ambitious. Its leaders now claim the party will be a decisive force for at least another five years. The Maoists goal is to become the second largest party after the Congress while also preventing the latter from securing a majority.

Some Maoist leaders say it is only but natural for Dahal to stake a claim on premiership after he extended full support to Deuba’s bid for prime minister following the collapse of the Oli government. It is time, they say, for Deuba to return the favor.

“The fate of the electoral alliance revolves around this central issue,” Maoist leader Khagaraj Raj Bhatta says. “The Nepali Congress must show flexibility on power- and seat-sharing to keep the coalition intact.”

Meanwhile, notwithstanding the bitter feud between Dahal and Oli that led to the breakup of the erstwhile Nepal Communist Party (NCP), the Maoist party is also holding talks with the UML on a possible electoral alliance.

Earlier this week, senior Maoist leader Narayan Kaji Shrestha said he is in favor of an alliance with the UML, even if it is impossible to reunite the two parties in the near future.

UML Chairman Oli, however, is in no hurry. He wants to become prime minister for one more term and the chances that he will support Dahal’s premiership bid are slim.

Oli nevertheless has conveyed to Dahal that he is positive about a possible poll alliance, while also making it clear that he will not sign any power-sharing deal before the elections.

Oli is under the pressure from the UML’s second-rung leaders to forge an electoral alliance—if not unify—with the Maoists. There is also pressure from China on Oli and Dahal to come together.

China had played a crucial role for the 2018 UML-Maoist unity, if only to counter the US influence in Nepal. Although the merger broke down over Oli-Dahal rivalry, Beijing still wants a communist-led government in Kathmandu.

This time, however, China has taken a softer and subtler approach while trying to persuade the two largest left parties in Nepal to work together.

Some Maoist leaders say as neither the Congress nor the UML is in a position to form a government on its own, the post of prime minister is again up for negotiation.

Political analyst Bishnu Dahal also says Maoist Chairman Dahal wants to become prime minister at any cost as he has been out of power for more than five years.

“Whether the Maoist party partners with the Congress or the UML in the elections, Dahal wants the prime minister’s post for himself,” he says.

Meanwhile, the Maoists, the CPN (Unified Socialist) and senior communist leader Bam Dev Gautam are trying to forge a leftist ideological alliance in order to increase their collective bargaining power with Congress or CPN-UML. They are also contemplating the formation of a new socialist party. 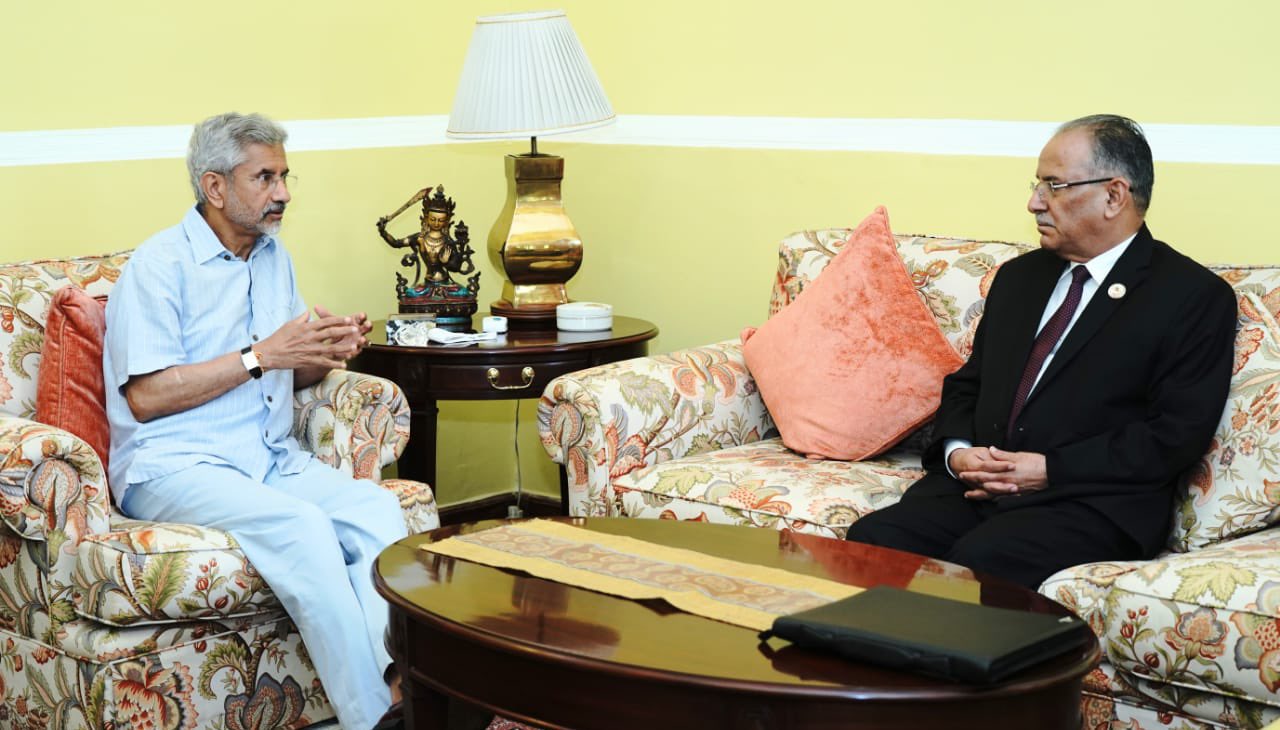 In an interview, Dahal said that he had assured Indian officials there would be no repeat of the 2017 surprise left alliance this time.

The Maoist-UML poll alliance and their subsequent merger had caught India unawares.

A New Delhi-diplomatic source says Delhi does not want a repeat of 2017 and has urged Dahal to continue the current alliance with the Nepali Congress. Dahal too has assured senior Indian officials that his priority is continuation of the current five-party coalition.

Indian Prime Minister Narendra Modi did not grant an audience to the Maoist chief, the source says, as the Indian officials Dahal interacted with were not convinced of the sincerity of his pledges.

First lady Arzu Rana Deuba, who is in New Delhi for medical treatment, has been in regular consultations with Indian officials.