Buddhi Narayan Shrestha: The man who gave us new map of Nepal

Pioneer in publishing Chuche Naksa for the first time in 2003 in his book ‘Border Management of Nepal’ | Photos: Pratik Rayamajhi/ApEx

Started government job at the Department of Survey in 1965

From an early age, I was interested to know about different countries and their attractions. I used to read about those countries and visualize what they looked like. Perhaps, that’s what got me into majoring in geography.

I was born and raised in Okhaldhunga. I came to Kathmandu after completing my eighth grade in my village; it was a nine days’ walk.

I got my IA, BA and MA degrees from Tribhuvan University and a land survey diploma course from West Bengal Survey Institute, Calcutta. I also took a course on land use planning from the University of Guelph, Canada.

My land surveying background got me a job in the Survey Department of Nepal in 1965. I worked there for 26 years and retired after completing a five-year tenure as the department’s director general.

While working in the department, I got the opportunity to participate in national and international training. These trainings taught me a lot about geography and international boundaries. Because of my knowledge and expertise, I was given the opportunity to lead the government delegation of the Nepal-India Joint Technical Level Boundary Committee and Nepal-China Boundary Committee several times to resolve the inter-country border issues.

After my retirement, I established Bhumichitra Mapping Company with my colleagues from the Survey Department. The company works as a private consultant for land-related works.

In 1995, I wrote an article for the Kantipur daily titled ‘Jange Khambako Darja’. It was about India’s encroachment of a border pillar between Nepal and India in Jhapa district. After the piece was published, many readers asked me to continue such writings. I then started writing on border issues regularly. My writing journey also pushed me into conducting my own research on borders.

My first book ‘Nepalko Simana’ was on my experience during the border dispute negotiations with India and China. It won the Madan Puraskar in 2001. This recognition encouraged me to write more. I have written 14 books to date.

My second book ‘Border Management of Nepal’ was published in 2003, and it featured for the first time the ‘Chuche Naksa’ (Nepal’s map including the disputed regions in the North West). I wrote the book in English so that the international community can read it and know the reality.

Soon after I published the book, many scholars, politicians, ministers and lawmakers asked me for a copy of the map.

As a border analyst, I established the statistical data of India-encroached territory of Lipulekh-Kalapani-Limpiyadhura 372 sq km, Susta 145 sq km and 89 sq km in other 69 places, being a total of 606 sq km.

This map was the basis for the endorsement of the new official map of Nepal by the KP Oli-led government in 2022.

I scoured through many libraries around the world, including the ones in London and New York. At the Library of Congress in New York, I discovered that the origin of the Mahakali River was Limpiyadhura, not Lipulekh.

When India published its official map including Nepali territory in 2019, I joined protests from the US. I spoke outside the White House in Washington and the UN building in New York. I explained to the protest attendees how India started encroaching on Nepali land from 1962. We even met David Hunter, representative of UN Secretary-General Antonio Guterres and handed over a memorandum of request to free the Nepali territory from Indian occupation.

My campaign to reclaim Nepali territory did not start in 2019, though. I have been urging almost every government and prime minister since 1999 to do something about the border issue.

The then prime minister Krishna Prasad Bhattarai and his government was the only leader who actually showed some concern. Bhattarai even issued a directive to form a committee to investigate the border issues, but he was soon out of the government.

I have also inspected various spots on the boundary verifying map for the documentary film ‘Greater Nepal—In Quest of Boundaries’ directed by Manoj Pandit. One of my books ‘International Boundaries of Nepal’ is published in Latvia, Europe, and is translated into eight languages (Russian, German, French, Dutch, Italian, Spanish, Portuguese, and Polish).

Besides, I have also worked as a board member of the Institute of Foreign Affairs (IFA), Ministry of Foreign Affairs from 2012 to 2016. I was the member secretary of the City Planning Commission (CPC) at Kathmandu Metropolitan City for a year in 2003. I have also collaborated with the International Boundaries Research Unit (IBRU), UK; Association for Borderland Studies, US; South Asian Studies Association of Australia; and Transparency International Nepal, among others.

Even in India, I have attended many border-related conferences. Command and Staff Colleges of the Nepal Army, Armed Police Force, and Nepal Police often invite me as a guest lecturer. I have always believed that border issues with neighboring countries should be resolved through dialogue based on historical maps and related documents.

Lately, I have been engaged in research, study, publications, presentations, and discussions on the boundary of Nepal, border management, and border-related issues in Nepal. I do not just find the problems related to boundaries, but also try to find solutions and suggest the government. I am determined to contribute to protecting the national boundary and preventing territorial encroachment from neighboring countries. We need to create awareness for national integrity, security, and solidarity through border research. 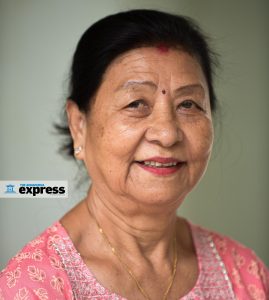 My husband cares a little about his personal life because for him, this country and its people are his home and family. He has dedicated his life to border study and research. Together, we have visited Nepal-India border areas many times and I have seen him work. His love and dedication for Nepal amaze me. Buddhi Ji and I have been friends since 1959. We were classmates in our BA and MA. We have even shared a room for a couple of years. His research on borders has revealed many truths to the public. I have cited his findings in my books as well. But there are a few issues that we two do not agree on. I nevertheless admire his dedication and work. 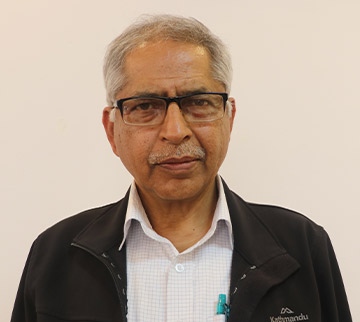 I have read most of his books and reviewed a few of them. As a border researcher, he has a broad knowledge on Nepal-India boundaries. Few of his findings have been opposed by some researchers, but he has consistently defended them. His works inspire and encourage others to study and research about national and international boundaries.