In a strange attempt to charm his 1.3 million followers on Twitter, Bhattarai posted a meme that shows a saffron-clad Yogi Adityanath, current Chief Minister of India’s Uttar Pradesh state, pouring milk into a body of water | marxistleninist.wordpress.com

It is difficult to imagine Dr Baburam Bhattarai, PhD looking up to the disgraced former US President Donald Trump for inspiration. There is little in common there. So it was bizarre that Bhattarai would steal a trick from Trump's social media playbook: share a meme, consequences be damned.

In a strange attempt to charm his 1.3 million followers on Twitter, Bhattarai posted a meme that shows a saffron-clad Yogi Adityanath, current Chief Minister of India's Uttar Pradesh state, pouring milk into a body of water. Above the picture, the words read, “Faith is a dangerous thing. It makes you throw away the milk and drink urine.” The joke didn't land. Not many were laughing. I found it embarrassing. 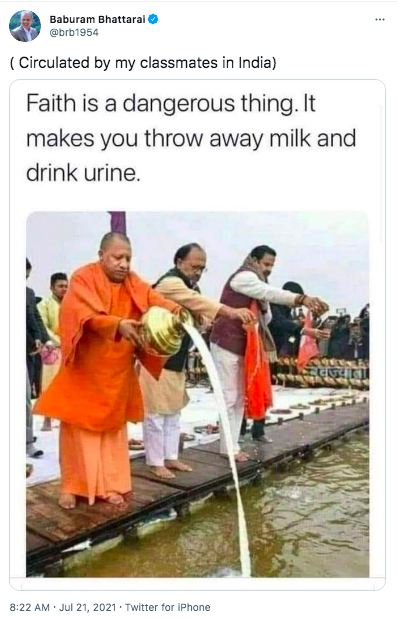 The meme would be hard to justify had a common Twitter troll posted it. It's inexcusable for a former prime minister and a public intellectual at that. Why Bhattarai decides to insult the chief minister of an Indian state with which Nepal shares deep social and economic relations is difficult to explain. This at a time when Nepal-India relations are in a possible upswing (the Dharchula incident hadn't yet happened). It is a recipe for an unnecessary diplomatic row. And what an embarrassment it would be too! Could the current government, so reliant on India for political, economic, and medical support, afford this sideshow?

A liberal reader might be inclined to forgive Dactor Sahab had he criticized Adityanath on the Indian government’s delay in sending vaccines to Nepal. Or even Yogi's comments about the role of religion in this country. Or his past rhetoric about other faiths. But this is not what the good doctor chose to do. Instead, he criticized Yogi for performing a simple act of faith, of offering milk as an act of worship. Something millions of Hindus humbly do every day.

The meme wasn't a criticism of the role of Hinduism in politics. This wasn't Raghuji Panta criticizing KP Oli's attempts to seek Pashupatinath's favors to improve his political fortunes. This wasn't women invoking Sita to make valid points about the patriarchy in our society. There was no broader political message. The meme's point was the insult of Hindus, and the problematic reference to drinking urine brings this home. Bhattarai can't, and to my knowledge hasn't attempted to, say— he’s ignorant about how this caricature is constantly deployed to dehumanize Hindus—including in countries where they are persecuted.

That his stance wasn't moral or universal was obvious. Barely two hours after this tweet against the danger of faith, he politely wished the Muslim community a happy Eid-Ul-Adha. He raised no objections. He gave no lectures. He made no insults.

But let's not let this chance provided by Bhattarai's gaffe go to waste. This tweet is an opportunity to begin a conversation about the term "Hinduphobia." This relatively new term hasn't yet found currency in Nepali politics but is increasingly adopted in the Tweeter-verse. In April this year, the Hindu Students Council (HSC) at Rutgers University in the US hosted an academic conference entitled "Understanding Hinduphobia." Given that this was the first conference on the subject, the purpose of the meeting was pretty broad. And the working definition they've given is equally comprehensive: "Hinduphobia is a set of antagonistic, destructive, and derogatory attitudes and behaviors towards Sanatana Dharma (Hinduism) and Hindus that may manifest as prejudice, fear, or hatred. Hinduphobic rhetoric reduces the entirety of Sanatana Dharma to a rigid, oppressive, and regressive tradition."

It's noteworthy that academics and not political or cultural groups led the conference. Also important is the venue. Rutgers University has become center stage between Hindus who assert that Hinduphobia is a pernicious and targeted form of bigotry and critics who claim Hinduphobia is a myth propagated by the Hindu Right to suppress valid criticism of Hindutva and intimidate people into silence.

Bhattarai’s tweet doesn't do the critics of the term "Hinduphobia" any favors. His meme does reduce "the entirety of Sanatana Dharma to a rigid, oppressive, and regressive tradition." It is particularly telling that this comes from an ex-communist, now socialist, former prime minister.

Bhattarai ought to know better. As a veteran politician, he should know sentiments and style matter in politics, both domestically and internationally. Whatever his version of Make Nepal Great Again, it won't be achieved by intentionally insulting 80 percent of this country's population. Or is he of the belief that insulting Hindus has no political or electoral consequences? If so, the narrative that Hindus are a political force in Nepal is widely overblown.

Trash talk like this hampers constructive public discourse and ultimately weakens the foundations on which we ought to build our republic. An idea for which Bhattarai himself and millions of Nepalis with him have sacrificed much and lost many.

Personally, it was the sly manner with which he framed the meme that struck a particular nerve. In the text box attached to the meme, Bhattarai wrote, "(Circulated by my classmates in India)." What cowardice! A feeble attempt to seem brave for sharing the meme while simultaneously seeking a cover behind friends. This too was straight out of Trump's playbook: always have an escape route, and when things go wrong, blame it on friends.

Slok Gyawali is a writer based in Portland, Oregon