The army has felled over 27,000 trees while opening the expressway-track. There are 13 community forests and many national forests in project areas | Photos: Pratik Rayamajhi/ApEx

The under-construction Kathmandu-Tarai fast track passes through 30km of agricultural land and 43km of forest cover. The project’s Environmental Impact Assessment (EIA), approved in 2015 foresees physical, biological, socio-economic, and cultural impacts from expressway construction. These impacts, the EIA estimated, would be particularly high in 38 villages that lie within 50-meter distance of the road development sites.

On its website, the Nepal Army, which is building the fast track, has put the EIA under the project’s ‘salient features’ category. It claims environmental concerns were fully addressed during the project’s planning, preliminary design and alignment phases. It also guarantees continuous monitoring of project sites and assures necessary steps will be taken for environment-protection and impact-mitigation.

Based on these commitments, the army, in late 2021, submitted a supplementary EIA report, which was later approved by the Ministry of Forests and Environment.

But the report clashes with ground realities.

During a recent ApEx field-reporting trip of the expressway, our team spotted several unaddressed EIA concerns.

As we reported on March 10, some Chinese workers had chopped down almost a dozen trees without any permit at Bandarekholchha of Makwanpurgadhi Rural Municipality in Makwanpur district. The army camp set up to liaise with the local community on fast track-related concerns had mostly ignored the villagers’ complaints.

In the same place, the army has cut off half of a hillside atop which sits a small village. This has exposed the village to landslide and erosion risks, once again suggesting the flouting of the EIA directives. But the army denies any oversight.

Brig. Gen. Bikash Pokharel, the fast track project chief, dismissed our findings and denied the EIA protocols were violated. He even refused to accept our photographic evidence.

The army has felled over 27,000 trees while opening the expressway-track. There are 13 community forests and several other national forests in project areas.

As the expressway doesn’t cut through dense forest areas, there is unlikely to be much destruction of wildlife habitat. But, at the same time, the potential destruction of endangered species of natural flora cannot be disregarded. 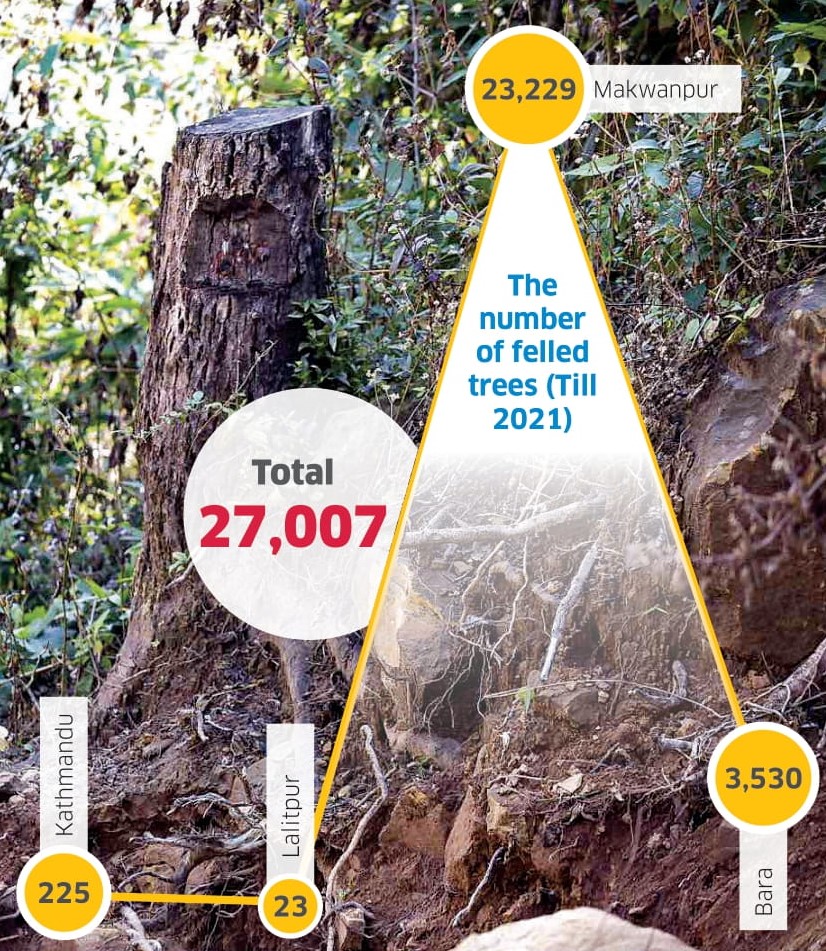 Pollution is another environmental concern that seems to have gone unnoticed.

Residents living near fast track construction sites told ApEx that their earlier peaceful lives had been disrupted by the noise and vibration from earth-movers and other machines.

“We have to listen to this racket all the time. It’s unrelenting: construction happens day and night,” says Hikmat Tamang, a resident of Makwanpurgadhi Rural Municipality.

Residents close to the project sites also complain of deteriorating air quality. They say dust and dirt particles emanating from drilling, quarrying and blasting have polluted ambient air. Excessive dust particles have also harmed the crops of local farmers who rely on cash crops like pear, banana, maize, wheat and lapsi for their livelihood.

Also read: What if… the fast track project was completed on time?

Health experts say such constant noise and pollution could lead to physical and mental health problems.

But the army does not seem to have made any effort to rein in pollution at the project sites.

“You must water the construction sites twice a day to minimize the volume of dust in the air,” says environmentalist Aananda Bhandari.

Similarly, banning pressure horns, using noise barriers and silencers on vehicles and crushing plants, and limiting the use of explosives could minimize noise pollution. Planting of tree species such as the Ashoka is also useful in absorbing noise and air pollutants.

However, in many places, none of these mitigation measures seems to have been employed.

Bhandari thinks the expressway has been particularly egregious in neglecting environmental concerns compared to Nepal’s other mega projects.

“Apparently, as the fast track runs through small villages and only thin forest areas, perhaps the army does not think it will have much environmental impact,” he says. “But when it comes to preserving the environment, there should be no compromise. We should ask the army to strictly adhere to the EIA protocols.”

According to the EIA report, water quality at the project development sites was already poor, unsuitable for drinking or irrigation. The project has had relatively little impact on water resources. Still, the army has ignored the mandatory installation of wastewater treatment plants at project sites.

The only thing the army seems to be doing to protect the environment on a consistent basis is regularly disposing of the excavated waste.

Yet the army insists the fast track has not violated any EIA guidelines.

Officials at the Ministry of Forests and Environment also say there have been no reports of environmental concerns.

“We have not received any such complaints over the project on our regular inspections,” says Megh Nath Kafle, the ministry’s spokesperson.

When ApEx shared some examples of potential environmental breaches, he committed to unearthing the truth soon.