The 22-km-long Tri Chandra Nepal Tara Ropeway came into operation in 1927 and it is believed to be one of the first ropeways in the whole of South Asia. It linked the villages of Matatirtha in Kathmandu with Dhorsing in Makawanpur

The year 2022 marks the centenary of the start of ropeway transport in Nepal. It all began with a 22-km cargo ropeway between Makwanpur to Kathmandu. Construction on it started in 1922 and was completed in 1927. A separate four-km Swayambhunath Ropeway was built in 1924 to ferry stones from a quarry in Halchowk all the way to Lainchaur in order to build Rana palaces and roads.

These pioneering and other ropeway projects have either disappeared or are no longer in operation.

Here we discuss some such ropeways that once played a vital role in transport of goods and as a vehicle for the country’s economic development. 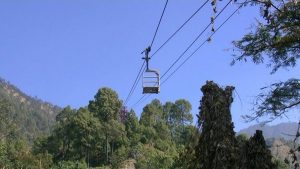 If you have traveled from Kathmandu to Hetauda via Mugling, you might have noticed rusted carriages attached to a cable over the Trisuli River. This ropeway, now abandoned, was among the first of its kind in South Asia.

It was commissioned by the then Nepali Prime Minister, Chandra Shamsher, in 1922. The British government had funded the project as a gift to Nepal for its support in the First World War.

The 22-km-long Tri Chandra Nepal Tara Ropeway came into operation in 1927 and it is believed to be one of the first ropeways in the whole of South Asia. It linked the villages of Matatirtha in Kathmandu with Dhorsing in Makawanpur.

It was used to transport goods that were brought via Raxaul in India. The consignments were transported from Amlekhgunj in Bara up to Dhorsing in trucks and dispatched to Matatirtha in Kathmandu on the ropeway. A single carriage, traveling at 6.8 km an hour, could bear 254 kg.

In 1964, the ropeway was extended and upgraded with American assistance to transport goods from Hetauda to Kathmandu, as the Tribhuvan Highway used to be frequently obstructed due to landslides. The ropeway was 42-km long and had a hauling capacity of 22 tons an hour.

It started falling out of favor in the early 1970s, says Guna Raj Dhakal, chairman of Ropeway Nepal Pvt. Ltd., mainly due to poor planning, mismanagement and political meddling.

“Political interference led to overstaffing and at the same time, paucity of technical staff. The infrastructure also could not be maintained as and when necessary,” says Dhakal.

The country’s first and one-of-its-kind ropeway went out of commission following a technical glitch at one of its substations in 1999. The problem could have been fixed for as little as Rs 400,000 but the government of the day chose not to.

Tri Chandra Nepal Tara Ropeway, which could transport goods from Hetauda to Kathmandu in four hours, at the cost of 34 paisa a kg, was permanently shut in 2001. At the time of its closure, it used to operate 10 hours a day and employed almost 900 people. 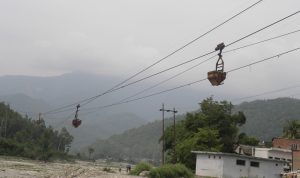 Hetauda Cement, established in 1976, was one of the most successful factories in Nepal, thanks largely to the ropeway system. Starting in 1986, the state-owned factory used the ropeway to transport limestone from a quarry located 11 km away.

It could transport 150 tons of limestone in an hour. Moreover, the cost of ropeway transport was almost half compared to truck-use. The factory thus saved around Rs 2m a year in limestone transport alone. It had no major operational problems other than some technical issues as a result of wear and tear and lack of regular maintenance.

The ropeway operated for nearly 17 years before it was abandoned—again, over a fixable issue.

According to the book ‘Ropeways in Nepal’, the ropeway was discontinued after one of the frames propping the cable system sank following a landslide.

It was permanently shut in 2004. Meanwhile, the Hetauda Cement Factory, though still in operation, is fast-turning into a white elephant.

Factory officials plan to sell the rusted ropeway equipment, which pose risk to the settlements below, but no buyers have come forward. During the 1990s, villagers of the erstwhile Ikudol Village Development Committee in Lalitpur district mostly relied on buffalo farming. But their products including milk lacked market access, as the nearest collection center was at Tinpane, a five-hour walk away. Milk would curdle up by the time villagers reached the center.

So they turned the milk into ‘Khuwa’ (a thickened dairy product made by heating up milk), and sold it at Chapagaun, a 10-hour walk away from Ikudol.

The process of making Khuwa was labor-intensive and polluting as the villagers burned firewood to boil the milk. So Bagmati Watershed Project (BWP) considered stretching a steel cable across the valley and using it to transport fresh milk in a much shorter time.

In 1995, Conservation Ropeway was built at Bhattedanda to transport milk and clean up the dirty Khuwa business. Every day, 143 households in Ikudol used the ‘milkway’ to collectively sell around 900 liters of fresh milk a day.

“Besides milk, the ropeway also benefited vegetable and flower farmers,” says Madhukar Upadhya, a team member of BWP. “The others who profited were merchants, construction contractors, local cooperatives, and development workers who used it occasionally to transport goods”.

But traffic on the milkway started declining after 1996. A road to Chhabeli opened up and people could now transport their goods on vehicles. Still, the Bhattedanda ropeway was in profit and a plan to extend its span was afoot. But the plan never reached its fruition as the local villagers felt that they could do without it.

The milkway stopped operating in 2001 after helping the rural economy for more than five years.

“Lack of local support plus the new road connectivity doomed it,” says Upadhya.

The ropeway was briefly revived when landslides damaged the roadway in the Bhattedanda area in 2002 but was permanently shut down in 2004 following road repairs. 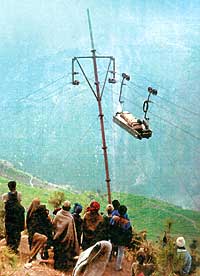 When Bir Bahadur Ghale, a local of Barpak village in Gorkha, went to Hong Kong in 1986, he was fascinated by the cable cars he saw there. He saw them as a convenient way of transporting goods and people in hill areas.

He returned home with the dream of building a ropeway in his village. His dream would come true in 1998 when the British Embassy in Kathmandu in cooperation with the Intermediate Technology Development Group (ITDG-Nepal) agreed to help with a goods-carrying ropeway in Barpak.

The ropeway connected Rangrung and Barpak—villages separated by a two-day hike—and had an immediate impact on the people and the local economy. Every day, three tons of goods were transported to Barpak. The ropeway made an average of 20 trips a day between 10 am to 5 pm, and generated an average daily gross income of Rs 1,500.

Writing in ‘Ropeways in Nepal’, Ghale mentions that the selling price of transported goods had dropped by Rs 2-3 a kg (and even more) after the ropeway came into operation. For instance, the cost of a four-kg sand-pack went from Rs 8 to Rs 3.

The neighboring villages of Laprak and Gumda also benefited from the ropeway.

However, the ropeway was shut down just four months into its operation in May 1999 following an accident when four people riding in the goods carriage died when the hauling cable snapped.

Ghale says the ropeway was not meant for transporting passengers but the villagers did not listen. They argued that they too should be allowed to travel via the ropeway as the technical staff did the same for maintenance purposes.

The ropeway, which instantly became a profitable enterprise, was permanently discontinued following the fatal accident.