ApEx Explainer: Everything you need to know before Nov 20 polls

The local level election held on May 13 was the second of its kind after Nepal adopted federalism. It elected representatives in six metropolitan cities, 11 sub-metropolitan cities, 276 municipalities, and 460 rural municipalities. On Nov 20, the country will once again head to voting stations to elect representatives to the federal parliament and seven provincial assemblies. The polls, which will elect 825 representatives in the federal parliament and provincial assemblies, are being held in a single phase. Here is an explainer on the elections.

How is the federal parliament formed?

The House of Representatives (lower house) and the National Assembly (upper house) make up the federal parliament.

The lower house has 275 seats of which, 60 percent (165 seats) are chosen through first-past-the-post (FPTP) electoral system, while the remaining 40 percent (110 seats) will be elected through a proportional representation (PR) basis. The PR system aims to ensure representation of women, Dalits, Madhesis, indigenous groups, and minorities in the governing structures.

Article 85 of the constitution says: “Unless dissolved earlier, the term of the HoR shall be of five years.” The previous federal and provincial elections took place in two phases in November and December 2017. So, this December will be the end of the five-year term of parliament. The constitution has not envisioned a parliamentary vacuum of over six months; hence it was necessary to conduct parliamentary elections within six months of December 2022. But Nepal didn’t enter this period, as the government announced the elections before December.

However, the Nov 20 election is not for the National Assembly (NA) or the upper house. The NA is a 59-member permanent body, with 56 members chosen by an electoral college consisting of provincial assembly members and village and municipal executive members. The president nominates three members. It has a term of six years, with one-third of its members retiring every two years on a rotational basis.

What about provincial assemblies?

Provincial assemblies are unicameral legislative bodies. The numbers of provincial lawmakers vary from one province to another. Unless dissolved earlier according to the constitution, the term of these assemblies is five years. Their term may be extended for a period not exceeding one year in cases where a proclamation or order of the state of emergency is in effect.

Province 1 has 93 seats, Madhes has 107, Bagmati has 110, and Gandaki has 60 seats in their respective assemblies. Similarly, Lumbini Province has 87 seats, Karnali has 40, and Sudurpaschim has 53 seats. Altogether, there are 550 seats in the seven provincial assemblies.

What is the role of the Election Commission?

The Election Commission is a constitutional body responsible for conducting and monitoring elections, as well as registering parties and candidates and reporting election outcomes. However, it cannot announce dates for any election. Only the government holds this right.

For a long time, the commission has been making a case for its right to do so. According to former commission officials, giving the commission such a mandate will ensure timely elections. As the government has the right to announce dates, the ruling parties often tend to declare elections at their convenience.

Is there any change in our electoral system?

Even though there was a debate about changing the electoral system, Nepal is still following the same election system: a mixed voting system based on FPTP and PR. Ruling coalition partner CPN (Maoist Center) had proposed a completely proportional election system, citing that elections are becoming costly and adopting a fully PR electoral system was a solution. Other parties like the Nepali Congress and CPN-UML did not accept the proposition.

A party has to cross the election threshold of three percent of the overall valid vote to be allocated a seat under the PR method. And to be a national party, a party should have at least one seat from FPTP and one from PR in the lower house.

Those Nepalis who are 18 years old and are registered on the voters’ list of the poll body can vote. As soon as the government announced the election, the Election Commission stopped the voter registration process. And if you didn’t register before the cut-off time, you missed the voting rights this time. The next voter registration process will resume soon after the upcoming elections ends.

If you are a registered voter, you can vote by showing your Voter ID or other government-issued IDs at your respective polling station. Newly registered voters can collect their Voter IDs from the polling centers.

How many types of ballot papers are there this time?

Remember, under the FPTP system, you are directly voting for a candidate of your constituency. Under the PR system, you are voting for a party and the party, if it passes the stipulated threshold, will send as many PR candidates as the seats it won to parliament. The parties have already submitted their PR list to the commission and they will be called up in an already-fixed serial order.

There will be four separate ballot boxes as well. Each voter will first get the FPTP ballot paper for the HoR election. After casting the vote in the respective ballot box, the voter will get a PR ballot paper. The same pattern will follow for the provincial assembly.

How to reduce invalid votes?

There are a few things you need to do to make your votes count. When you get your ballot paper, check if it has the signature of the voting officer. Use the ‘Swastik’ stamp, which is available in your polling booth, to mark your ballot paper. And make sure to stamp it clearly. Don’t use more or less ink and just stamp it once. 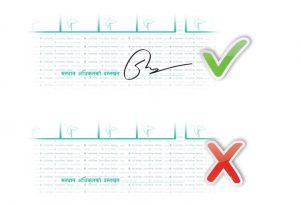 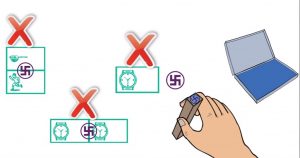 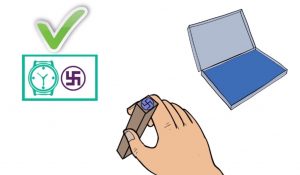 You should only stamp a single electoral symbol on each ballot paper to make your vote valid. Do not cast a vote for multiple symbols. You can neither divide your vote for two symbols. Make sure that your stamp is inside the set box. Do not put your stamp outside the box. It must not overlap with another, horizontally or vertically to make the vote valid.

The last part is folding your ballot paper, which is where many people fail. Fold it in a way that the ink does not get smudged or leave an imprint on any other symbol. Be mindful of where the ink stamp is and where it can leave an imprint. It is also a good idea to make sure that the ink has dried before you fold the paper.

You also need to maintain the secrecy of your vote. Do not fold the ballot paper in a way the face of the paper is turned outside. Visit the social media of the Election Commission for a better video graphical explanation of how to make your vote valid.

Why is there no electronic voting machine?

Could Nepalis outside Nepal vote?

In 2018, the Supreme Court issued a directive to the government, parliament, and the Election Commission to make necessary arrangements to ensure voting rights for all Nepalis living abroad. But this order has been ignored. None of the stakeholders have any valid reason as to why this is.

Even though the Maoist Center and the Nepali Congress had said that they would make it possible for Nepalis living abroad to vote, there have not been any positive results. The Election Commission officials say that the parties lack consensus on the matter. Election experts also suggest that political commitment, necessary laws, and resources are a must for this provision. So Nepalis based abroad cannot vote in this election.

What will the country get after the polls?

Same as now, a multi-party, federal democratic republic and parliamentary form of government will be formed after the election. As soon as the members of parliament are elected, it will elect a prime minister, who is the executive head. The leader of the party that wins a simple majority is invited to form the government. The prime minister will then form a cabinet. Similarly, the members of the provincial assemblies will choose chief ministers to run the respective provincial governments.

As for the president and vice president, they are constitutional posts with nominal power. An electoral college formed by the two houses of federal parliament and Provincial Assembly members will elect them.