PM Pushpa Kamal Dahal was not in favor of an Indian company getting the mega-project. Dahal then chose the army to complete it. It was a wonderful opportunity for the Maoist chairman to rebuild strain ties with the institution

Nepali political parties are experts at claiming credit, shifting blame and rewarding themselves while dealing with big development projects. Mothballing of projects started by the preceding government is also nothing new.

As ApEx takes a deep dive into the construction of Kathmandu-Tarai fast track, a national pride project, our team investigated behind-the-scenes maneuverings to influence the road’s progress for the benefit of certain parties, leaders—or even countries.

The 72.5km expressway linking Kathmandu valley with Bara district in the Tarai was envisioned decades ago. Work, however, started in earnest only in 2017 after the Maoist-led government handed the project to Nepal Army.

Earlier in 2014, the Sushil Koirala government had awarded the fast track to the Infrastructure Leasing & Financial Services (IL&FS), an Indian company, a decision which was later challenged in the Supreme Court. The petitioners had deemed the project cost too high. In response, the court on 9 Oct 2015 directed the government to halt all related work.

China had also been unhappy with the Koirala government’s decision to give fast track to an Indian company, says a former secretary of the Nepal government requesting anonymity.

The subsequent CPN-UML-led government under KP Sharma Oli terminated all agreements signed with the IL&FS.

In the meantime, the army started lobbying for the project. Its stars were aligned with the next government led by Pushpa Kamal Dahal that was not in favor of an Indian company getting the mega-project. Dahal then chose the army to complete it. It was a wonderful opportunity for the Maoist chairman to rebuild ties with the army that had been badly strained following his 2009 sacking of army chief Rukmangud Katawal. Dahal is also rumored to have leaned on the army to involve Chinese companies in the project.

But since then such instances of clear favoritism have been hard to find in relation to the fast track.

Aman Lal Modi, a CPN (Maoist Center) lawmaker, says although the project started under the Maoist-led government, his party would not try to take all the credit.

Similarly, when CPN (Unified Socialist) Chairman Madhav Kumar Nepal recently inspected fast track sites, many saw it as posturing to impress his constituency in Rautahat, which is near Nijgadh, the expressway’s end point.

However, Unified Socialist lawmaker Parbati Bishunkhe also dismisses the allegation that Nepal was trying to make a “political statement”. “As a responsible politician and former prime minister, it is his duty to oversee the mega-project’s progress,” she says.

Several governments have come and gone since work on the fast track began in 2017, but the project—originally slated for November 2021 completion—is nowhere near done. Every year, billions of rupees are being allocated for it, but the army says the money is still insufficient. The cost overruns are, meanwhile, bleeding the state’s coffers.

Representatives of major parties tell ApEx that while there is no competition to take credit, the common concern was regarding lack of budget for timely project completion.

“Is it even possible to allocate enough budget for the project? This should be our primary concern, not whether this or that political party is trying to influence the project,” says Ganesh Kumar Pahadi, a CPN-UML lawmaker.

Nepal must invest 13 to 15 percent of its GDP in infrastructure over the next two decades to meet its development goals. On highways and roads alone, the government needed to allocate around $1.3bn in 2020. The eventual allocation fell well short of that. The country’s annual infrastructure spending is expected to reach $5.6bn by 2025 and $7.5bn by 2030. It’s clear that the government cannot finance infrastructure projects requiring such huge investments.

Plenty of money has already been spent. When Krishna Bahadur Mahara was the finance minister in the Pushpa Kamal Dahal-led government, he had allocated Rs 1.35bn for the expressway in the fiscal year 2017-18. His successor Yubaraj Khatiwada of the UML then allocated Rs 10.13bn, Rs 15.93bn, and Rs 15.01bn respectively in the subsequent fiscal years. All three of these latter allocations were revised to Rs 8.6bn, Rs 5.97bn, and Rs 4.46bn. 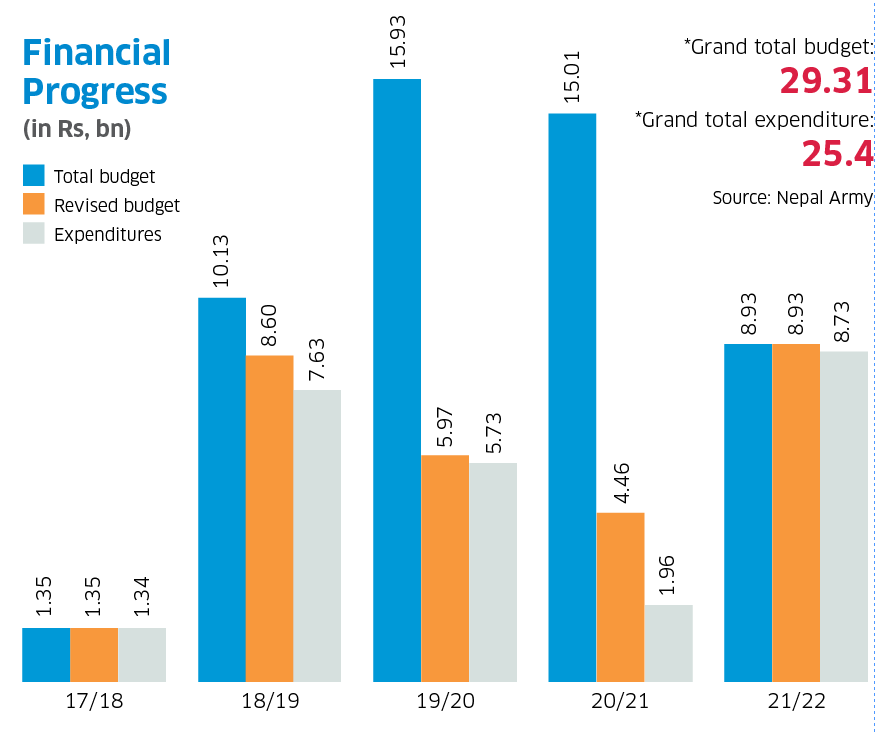 Then, former finance minister Bishnu Prasad Paudel of the UML allocated Rs 8.93bn for the project through an ordinance. The current Finance Minister Janardan Sharma approved the allocation in the latest budget.

But the army could still struggle to complete the expressway by the new January 2025 deadline. The estimated fast-track cost, initially projected at Rs 86bn, has already reached a whopping Rs 213bn.

With elections of all three tiers of government approaching, it would be difficult to allocate sufficient budget for the fast track in the coming years as well, providing the army another handy excuse to yet again push back the deadline.

The army’s work has not been satisfactory. There have been complaints over lack of transparency, violation of public procurement laws and breach of environmental regulations while building the expressway.

For instance, complaints have been filed with the Public Accounts Committee of the House of Representatives that the army hired a couple of Chinese companies for the project without due process.

This happened at a time when the Oli-led government had dissolved the lower house of Parliament in Dec 2020. As there was no relevant lower-house committee to file a complaint, the case was taken up by the National Affairs and Coordination Committee of the upper house.

“In the absence of the House of Representatives, the communist parties that favored the entry of the Chinese company let the army continue with the hiring process,” says a senior journalist who has been closely following the fast track project development.

But Radheshyam Adhikari, a former National Assembly member from the Nepali Congress, denies wrongdoing on the part of political parties. Adhikari was in the assembly’s National Affairs and Coordination Committee when it investigated the complaint against the army.

“We studied the case thoroughly and made recommendations in line with national interest,” he says. “We believe the national pride project is good for the country and its citizens and it shouldn’t be stopped at any cost.”